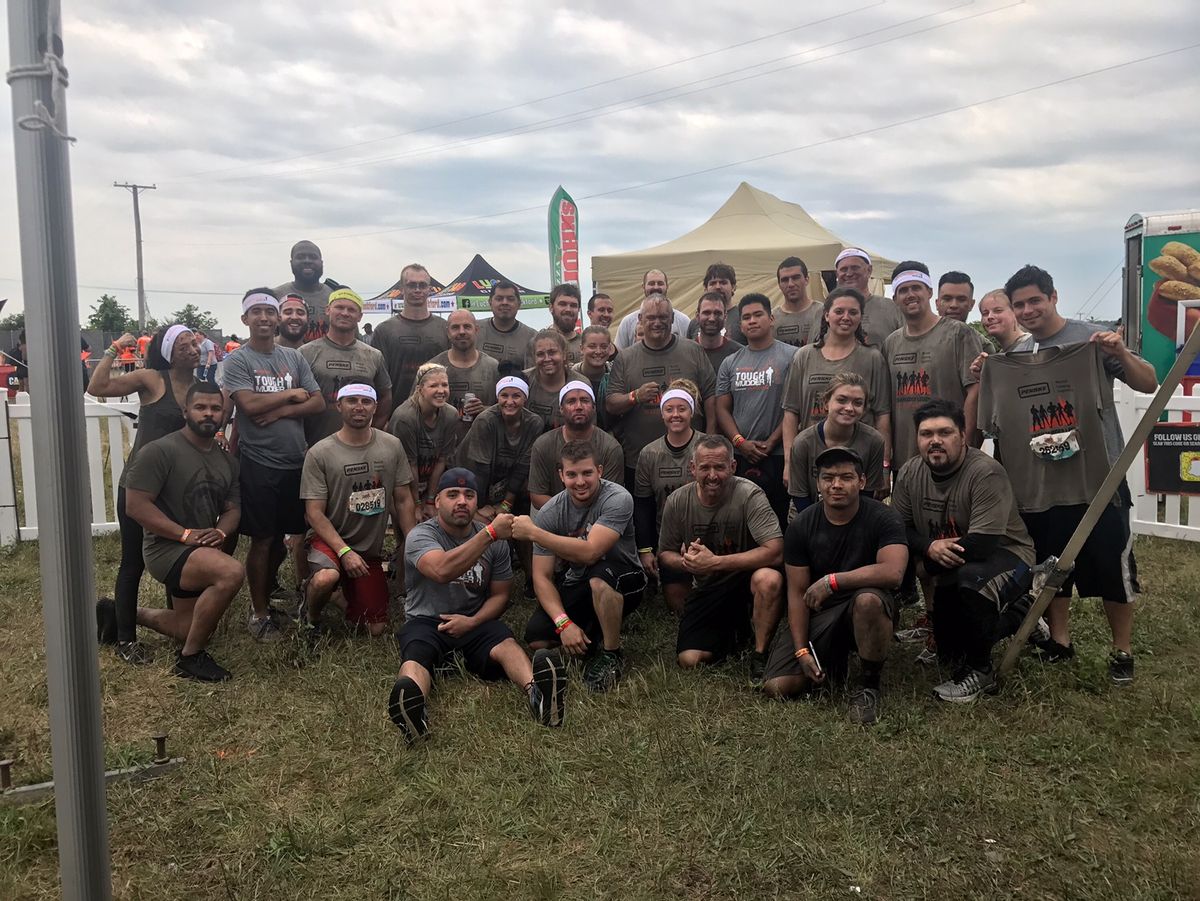 You get off to a great start in the middle of what looks to be a stampede of people. The first obstacle is ahead – a steep, 15-foot skateboard quarter-pipe that’s waiting to be climbed.

You struggle to get to the top. After you finally make it over the wall, you immediately drop to all fours and alligator crawl through mushy, cold mud, as the mud’s powerful suction slows you down.

After rushing from obstacle to obstacle, you can feel the aches and pains throughout your body. Completely covered in mud, you notice one more thing separating you from the finish line and from catching your breath: You have to carry heavy tree logs across a sun-beaming field.

When you finish, you ask yourself, “How could anyone have done this without a team to support you?”

Fortunately, there was a team that conquered these obstacles. Dozens of Penske associates participated in this challenge as part of a team-building exercise, and it proved to be a little messier – and more rewarding – than even they expected.

A Tough Mudder isn’t as much of a race as it is a 5-mile obstacle course completely covered in mud. Bragging rights don’t necessarily go to the one who finishes first -- just finishing the course is the real accomplishment.

“We were covered from head to toe in mud,” Ryan said. “It wasn’t that watery mud, either. It was like a soupy kind of mud, like guacamole.”

Charging through guacamole-like mud is no easy task, but Ryan was not alone in this challenge. Sixty other associates from the North and South Chicago districts joined him on that hot August day. However, they didn’t wake up one morning deciding to do this. That day of trudging through mud originated from a new philosophy that began months earlier.

Last year, the two districts initiated an ideology that would bring them closer together, called the One Chicago Concept.

“The One Chicago Concept aims to unite two districts within the same market in sharing ideas, people and resources,” said Mike Pritchard, area vice president of the North Central region. “We believe that One Chicago helps promote a strong team atmosphere that enhances the overall employee and customer experience.”

Both districts wanted to improve on their relationship and collaboration between each other. Ryan emphasized that as opposed to Cubs and White Sox fans, these two districts aren’t rivals working in the same city.

“We noticed that there wasn’t that one common goal,” Ryan said. “We felt more separated than we did close. Therefore, we got a team of 61 people, ranging from sales, technicians and rental to compete in this event.”

“Going into it, there was definitely a handful of people who were a little nervous,” said Allison Lewis, a lease sales representative of the South Chicago District. “There was a quarter-pipe that we had to run up, and the entire team had to get to the top. While each person runs up, the person sitting at the top tries to pull each person up one at a time. Did I mention you’re all covered in mud doing this?”

Both Ryan and Lewis admit that the Tough Mudder was challenging, but that didn’t stop anybody on their team from overcoming each obstacle.

“The Tough Mudder allows you to go around an obstacle if you feel uncomfortable,” said Ryan. “Not a single person on our team skipped an obstacle, and some of us weren’t as athletic as others. Everybody was cheering for each other.”

Another thing that made this challenge unique was that each person couldn’t conquer an obstacle on their own. All the obstacles were designed to be conquered by a team.

“Everyone had to come together. If you finished something first, you had to wait for your teammates to finish in order to complete the challenge,” said Ryan.

Ryan and Lewis agree that this event was a huge success for their team. They said that this team-building opportunity had a bigger impact back in the office than it did in the mud.

“That next Monday in the office, I had become closer to people who I didn’t know very well prior to the Tough Mudder,” said Lewis. “That’s important to me. Our work environment is built off knowing each other and helping each other out. Now we’re laughing and bonding.”

When asked if they think more team-building opportunities will come out of the Tough Mudder experience, Lewis and Ryan agreed that it might be the first of many.

“Two or three days following the event, we were all saying that we should definitely compete again,” Lewis said.

“We’re always looking for new ways to build comradery among the team,” said Ryan. “I have not found one person say they’re not doing this again. My goal is to get 100 people next year.”

Start a career at Penske and see firsthand how much we value a strong workplace culture and a supportive team atmosphere. If you’re interested in joining our great team, visit our careers website. Who knows what kind of team-building exercise you’ll do?