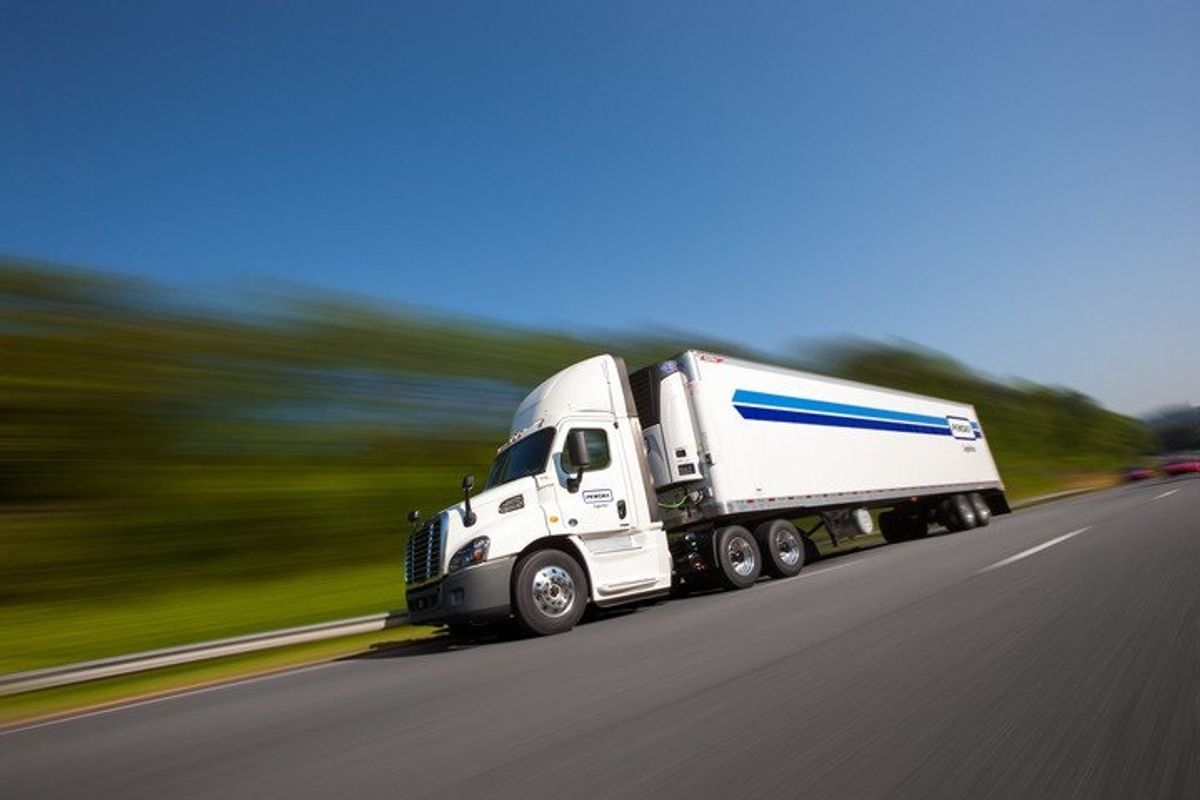 To improve service and create a competitive advantage, those within the supply chain are continuing to form meaningful partnerships. Communication is one of the critical components of a successful 3PL-shipper relationship, and reliable data remains at the core of many of those relationships.

As a result, shippers and 3PLs are investing in technology as well as data sharing capabilities as they look to create reliable and agile distribution networks. This is particularly relevant as retailers and manufacturing locations work to keep inventories low, respond to faster shipping demands and react to changes in demand patterns within the global economy.

Presenters included Dr. John Langley, a professor at Pennsylvania State University and author of the 23rd Annual Third-Party Logistics Study: The State of Logistics Outsourcing, and Balika Sonthalia, a vice president at A.T. Kearney and a presenter of CSCMP’s 29th Annual State of Logistics Report, both of which are presented by Penske Logistics. The 3PL Study is produced by Dr. Langley and Infosys.

Please visit www.3PLStudy.com to access the report at no cost.

Langley said that among those taking part in the 2019 23rd Annual Third-Party Logistics Study, 89 percent of shippers and 98 percent of 3PL providers agree that the use of 3PLs has contributed to improving services to the ultimate customers.

The majority of shippers—91 percent—and 3PLs—98 percent—report that the relationships they have with their 3PLs generally have been successful, Langley said. Tapping into the resources 3PLs offer is growing increasingly important as shippers look to reduce costs, secure capacity and obtain additional value.

The Annual Third-Party State of Logistics Study found that there has been a continuation of the most frequently outsourced activities, which tend to be those that are more transactional, operational and repetitive. The most common outsourced activities are domestic transportation (81 percent), international transportation (71 percent), warehousing (69 percent), freight forwarding (50 percent) and customs brokerage (40 percent).

State of the Supply Chain

A growing economy, continued growth in the e-commerce sector, tight carrier capacity and increasing demand for value-added warehousing services have positioned the third-party logistics market for rapid growth, according to the 29th Annual State of Logistics Report. In 2017, revenues reached $175 billion, and the U.S. market is expected to grow at about 5.5 percent through 2019 to reach a size of $195 billion.

Sonthalia said the logistics sector has continued to grow. "We don't have official statistics, but 3PLs, carriers and the trade press all report a robust business environment,” she said.

The current economic climate has resulted in rising rates. Although rates have remained elevated, there have been some slight shifts. When the State of Logistics Report was initially released in June, researchers said spot rates had increased about 30 percent and contract rates increased between 5 and 15 percent.

Sonthalia noted that since June, truckload, less-than-truckload, rail and ocean appears to have wavered in the summer, then tried to pick up in the fall with mixed results. Some routes are seeing more rate increases than the others, she said.

The truckload market has gradually gotten tighter with the DAT and Cass Freight Index hitting all-time highs in July. “There was a brief pause in August and the rest of the year looks like it’s going to stay tight, so shippers had better continue to make their freight attractive for carriers if they want to avoid the worst of it,” Sonthalia said.

To help combat costs, carriers are turning to technology to increase visibility, identify profitable lanes and shippers, and maximize backhaul matching. Shippers have also focused on efficiency. “The increased penalties imposed by retailers for on-time, in-full failures have sharpened their focus on more transparent and efficient shipping practices,” Sonthalia said.

The Need for Agility

The Third-Party Logistics Study found that to keep up with the increasing level of complexity within the supply chain, companies must be agile to meet rapidly evolving conditions and adjust quickly as market conditions change. While most shippers understand the need for agility, only 42 percent said they haven’t made changes to increase their inherent agility over the past five years, Langley said.

Technology has also helped 3PLs and shippers improve their ability to react quickly, and 3PLs are investing in systems to improve the flow of information and increase visibility, Langley said.

The cause of disruptions has also remained consistent. The majority of shippers (58 percent) and 3PLs (64 percent) report that most disruptions were due to natural disasters, extreme weather or pandemics. Shippers and 3PLs also cited infrastructure issues as well as extreme volatility in commodity, labor or energy prices, Langley said.

Disruptions can result in decreases in revenue or lower levels of customer service satisfaction. As part of the Annual Third-Party Logistics Study, 63 percent of shipper respondents said they have key metrics in place to quantify the impact of a disruption. However, the majority of 3PL respondents—57 percent—said they do not have metrics in place to measure the effect of a disruption.

The Significance of E-Commerce

E-commerce pushed parcel shipment volume up by 28 percent in 2017, to $96 billion, and forecasts indicate that will increase by another 20 percent by the end of 2018. So far, e-commerce growth has continued in 2018. It ticked up from 9.4 percent of total retail sales to 9.6 percent in the second quarter of 2018. The average of last five quarters was 9.2 percent, Sonthalia said.

“Lot of clients are focusing on expanding e-commerce presence to cash in with the wave,” Sonthalia of ATK said. “Compared to last year, each client I have been a part of, their presence in e-commerce has increased by 100 to 200 percent—certainly a path they want to push going forward.”

In e-commerce, big department stores are seeing double-digit growth in that channel and are generally losing ground in their bricks-and-mortar channels, Sonthalia said.

Because retailers continue to emphasize an always-on, always-open shopping experience that provides seamless interaction across all retail sales channels, shippers and their logistics partners must be fluid and move quickly, according to Penn State’s Langley. This year, the Annual Third-Party Logistics Study asked those within the supply chain about omnichannel retailing. The study last looked at the topic in 2015.

The current responses demonstrate that many shippers and 3PLs are still struggling to create an actual, omnichannel retailing experience.

The 3PL Study reported that technology could help those within the supply chain meet their omnichannel goals, with many shippers and 3PLs turning to integrated technologies.

3PLs and shippers utilizing, considering or piloting several fulfillment strategies to meet or exceed consumers’ expectations, such as Sunday delivery and customer delivery, and Langley said this could increase as companies work to meet more stringent consumer demands.

The last mile in logistics—the final segment of a delivery process—has been relevant for many years but has taken on enhanced significance with the growth in e-commerce and omni-channel distribution.

The CSCMP State of Logistics Report found that shippers, carriers and logistics providers are focusing on solutions that make the last mile more efficient, such as click and collect technology, crowdsourcing deliveries and pick-up lockers.

According to the report growing demand, rising expectations and increasing costs are forcing shippers to re-think their last mile supply chain and creating the potential for new players to enter the market.

Going beyond the last mile is the last yard within a delivery, Langley said. The last yard refers to what happens to a shipment once it is delivered to a customer or consumer and how it is routed to the specific location where it may be needed or used.

According to Langley, last-yard logistics can be chaotic. The pain points are driven by the increased package volumes and how these volumes impact the time and space constraints at the final destinations.

The Role of Technology

Shippers are increasingly aware that if they do not have the technological capabilities to accomplish their goals, they should partner with those that do, the 3PL Study’s Langley said. As the amount of available data increases, shippers and their logistics partners will need to be able to take the information and make it relevant as many 3PLs are already making significant investments in technology that allows them to analyze shippers’ operations.

The majority of shippers—93 percent—agree that IT capabilities are a necessary element of 3PL expertise, but just over half of shippers—55 percent—said they are satisfied with 3PL IT capabilities, the Annual Third-Party Logistics Study found.

The effective and efficient sharing of data between shippers and 3PLs resonates as a common denominator in effective shipper-3PL relationships, Langley said.

Sonthalia, of the State of Logistics Report, said blockchain in supply chain is starting to see real applications. In the food industry, for example, Walmart requires lettuce and spinach suppliers to join blockchain for traceability, she said.

As part of the Annual Third-Party Logistics Study, respondents were asked for the first time in this year’s survey about blockchain, with 8 percent of shippers and 15 percent of 3PLs indicating this was among the needed technologies.

Within the next 10 years, several technologies could have a high impact across logistics' networks, including the Uberization of freight, fully autonomous trucks, and artificial intelligence applications, the State of Logistics Report found.