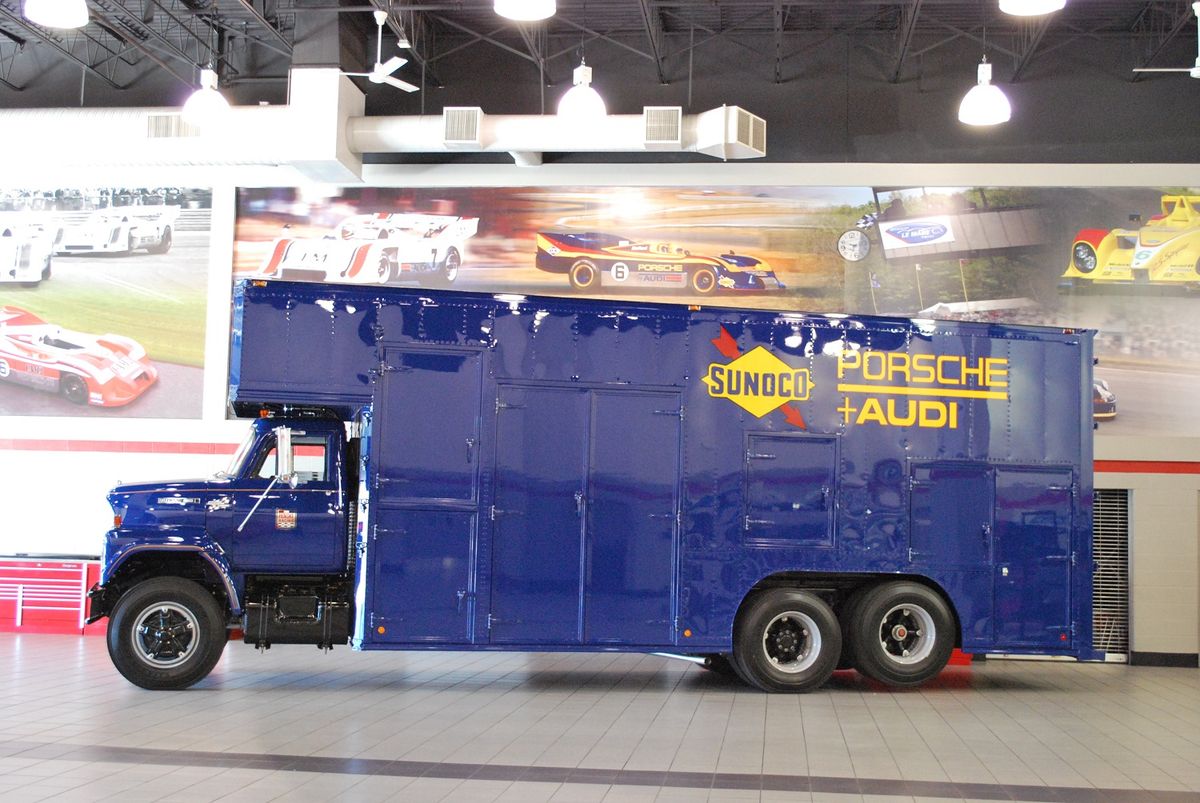 Following an exhaustive restoration process Team Penske has unveiled one of the most unique pieces of its history, a customized 1972 International Fleetstar truck known in the racing circles as The Blue Hilton. Penske Truck Leasing played a key role in the restoration process.

With assistance from Morgan Corporation and a dedicated group led by Penske Truck Leasing's James Svaasand, Michael Klotz, and David Hall - along with Team Penske Historian Bernie King - it took over 8,000 man-hours to complete the Blue Hilton transformation (see the top image).

The truck was one of the first known enclosed transporters used for racing purposes. It served the team in various capacities from 1972-1983. The restoration is complete down to the smallest detail, including authentic PPG paint and hand lettering just in time for Roger Penske's 80th birthday.

An iconic part of team history, the Blue Hilton (see bottom photo) transported the No. 66 McLaren that Mark Donohue drove to victory in the 1972 Indianapolis 500 – the first of Team Penske's record 16 wins in the Greatest Spectacle in Racing.

In conjunction with its sister transporter, The White Hilton, it was used to transport the powerful, championship-winning Porsche 917s that dominated the landscape of the Can-Am Series in the early 1970s with George Follmer and Donohue before it was sold in 1983.

“After we confirmed that it was, in fact, the Blue Hilton that was for sale, I called Brian Hard (president and CEO of Penske Truck Leasing) and we agreed that we had to find a way to bring her back to life," said Team Penske President Tim Cindric.

“This transporter was there when the foundation was laid for Team Penske and it is symbolic of the way in which we operate today," Cindric continued. “Everyone at PTL did an unbelievable job restoring this vehicle. I can't wait for Roger to see it in person, as it is something he will cherish."

The Blue Hilton helped change the landscape of auto racing, as it was the precursor to today's impressive closed transporters that carry cars, parts and equipment to race tracks all over the globe.

With his keen engineering mind, Donohue – a 2016 inaugural Team Penske Hall of Fame inductee and the organization's first champion driver – designed the payload area of the truck based on efficiency and functionality. It was aptly named the Blue Hilton based on its royal blue exterior and the sleeper area above the cab, which is a standard feature in today's transporters.

Until Jerry Breon, a long-time Penske team member, located the sales listing in an automotive trade magazine in the fall of 2015, this historic vehicle was thought to have been scrapped.

The truck was purchased from George Boyd of Urbana, Illinois, who had utilized it while competing in various racing series until retiring it to a spot on his property. He was the only owner of the truck after its days at Team Penske.

After verification and removal from the Boyd property, the Blue Hilton was towed to the Penske Truck Leasing collision repair center in Ft. Wayne, Indiana, where the restoration began with the help of Donohue's original blueprints.

“When you talk with the crew members that drove and worked out of this transporter over those years, and you look at the photos from the many cars it carried, you see how the Blue Hilton was an integral part of our history," said Bernie King.

“It's certainly very much a part of the Team Penske heritage," King said. “Everyone at Penske Truck Leasing that was involved did a fantastic job of restoring this truck to how it was when it ran and carried many of the team's winning cars."

Initially, Blue Hilton will be on display at the Team Penske headquarters in Mooresville, North Carolina, where fans can view it from the fan walk that runs the length of the massive shop floor.

By “Move Ahead" Staff